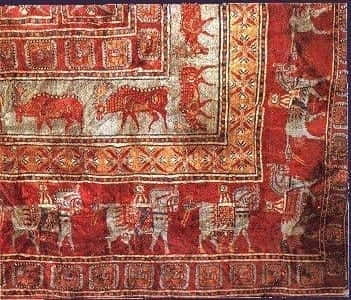 As early as 700 B.C., evidence has shown that civilisations wove fine materials together in an assortment of colours to create vivid and texturally unique carpets and rugs. Woven carpets have evolved tremendously in the centuries that followed; however, their history is still mysterious and their origin indefinite. During the Neolithic Age, evidence suggests that sections of woven flooring were used to cover the surfaces of dwellings. A theory about the historical significance and the invention of carpets asserts that carpets were initially created to serve a practical purpose. In an attempt to guard homes and people against the elements, nomads would use wool to create thickly knotted carpets. As weaving became more complex and varied, saddlebags, tent bands, and bedding bags were introduced into the market for textiles.

The Significance of Rugs in History

Carpets have been used throughout civilisation to make homes more inviting and charming. In addition to offering aesthetic appeal, they were also very useful items that allowed people to beautify an area of their home while also eliminating the need to walk on the bare ground. Carpets and rugs finely woven into beautiful, artistic representations quickly became essential to any household, festive ceremony, or traditional cultural event.

Knotted carpets are considered the earliest type of material flooring, and these carpets are produced from a horizontal loom or a long handed weaving process. A horizontal loom is essentially a tool with pedals that allows weavers to meticulously interlace threads together to create fine rugs. Interestingly, the horizontal loom evolved from the vertical loom, and in both types of loom, threads revolve around a cylinder at the peak. The threads are gathered together on the loom, and the finished piece is then collected once the weave is complete.

The History of the Pazyryk Rug

The Pazyryk rug is renowned all around the world for its enduring and extensive history. The Pazyryk rug was extracted from a tomb in Siberia in the late 1940’s. The rug was immaculately preserved in ice, and it was traced to the 5th century B.C. This piece of material is believed to be the oldest known rug that has been found, and the story of its unique preservation is fascinating.

A Sythian prince was buried with the rug in the 5th century B.C., and it appears that grave robbers attempted to amass valuables from the grave. When the grave was opened, water poured in. The water eventually turned to ice, and the rug remained preserved nearly intact. Another intriguing fact about the Pazyryk rug is that the materials were finely knotted, which indicates that it was not the first of its kind.

The ancient Pazyryk rug has a beautiful array of colours from insect and plant dyes. Before the rug was uncovered, the use of dyes from plants and insects was thought to be too sophisticated for rugs crafted during this time period. The intricate weave is also a testament to the achievements of the ancient civilisation, as each square inch has approximately 278 Turkish knots.

Other types of pile rugs often feature tribal designs as an honour to clans that made a significant impact on the region during a particular time period.

Oriental rugs are presumed to have their origins in Egypt, where symbolism appeared often in the designs and ornamentation that accompanied the rugs. During ancient times, oriental rugs were used as a way to express the symbolism and mysticism surrounding the natural religions and other fundamental elements in nature. The Egyptians and Assyrians predominantly used geometric patterns and beautiful floral designs when crafting their elaborate oriental rugs. Greece enhanced the floral and geometric patterns by adding a unique flair to the primitive embellishments that adorned rugs. As Greece attempted to improve these designs, they also significantly broadened the textile industry by introducing a novel style of weaving. Most of the oriental style rugs are woven with wool, although Eastern cultures did use other fabrics such as linen, cotton, and silk in finer rugs.

Carpets in the Middle Ages

In the medieval period dating from about 470 A.D. to 1200 A.D., carpets and rugs were commonly used to decorate homes. Wool was the most predominant type of material used, as it was available to the commoners in the region at the time. Other textile fabrics such as silk were also used.

Many of the rugs and carpets in the middle ages were imported from other Eastern regions. The oriental rugs were very popular vestiges of the Middle Ages. Traditional designs along with more intricate displays were common during this time period, and Turkey produced a substantial amount of rugs. Medieval art also played a significant role in the development and embellishment of rugs and carpets. Symbolism and unique medieval designs were woven into the carpets as a tribute to some of the more brilliant artwork of the era.

Rugs are often spun with a loom, either vertical or horizontal, but some cultures hand wove their warp threads together to create magnificent pieces of carpet. Hand knotted rugs are very prevalent, and they often offer rich textural styles as well as vivid colouring. A hand knotted rug may be knotted with symmetrical, asymmetrical, Tibetan, or jufti knots; however, there are many other types of knots that have been known throughout the ages.

Turkish knots, also referred to as Giordes or symmetrical knots, are essentially woven with a collection of identical single knots. Since these were easier to tie, they were often used in the ancient times; however, there were other popular types of knots. The Senneh knot, otherwise known as the asymmetrical or Persian knot, is also very common in history. These types of knots feature a double knot that is constructed from a single thread that is divided through the warp to create a knot that is open in either direction, left or right.

Traditionally the warp thread is used to tie knots; however, in the flat-weave knots or Kiliam knots, a weft thread is used to make textiles. This type of weave uses a combination of warp knots situated between a string of wefts. The wefts are primarily used for the design of the rug, and this method is of great contrast to the other weaving methods that predominantly display warp threads.

Rugs may be woven on a loom, with needle felts, tufted, or embroidered, in addition to the traditionally hand knotted style.

Historically, vegetable and insect dyes were used to create vivid shades, sharp contrasts, and complex patterns. In juxtaposition to synthetic dyes, the natural vegetable dyes produce a subtle, more beautiful hue that is unparalleled with any other form of dye. The root of the vegetable is used to extract colours, and the dyes are then transposed onto different types of rugs, carpets, and other textiles. The fruit, leaves, flowers, and other parts of the plant may also be used to create unique dyes.

Synthetic dyes often provide an inexpensive alternative to the more natural types of dye, but their colouring is not as appealing. They do, however, offer a number of different colours that cannot be procured from the roots or other elements of plants. Synthetic dyes were discovered in the 19th century, and although their hues may be less enticing to some, they are a component of many modern rugs. Some rug makers may use both natural and synthetic dyes to create their rugs.