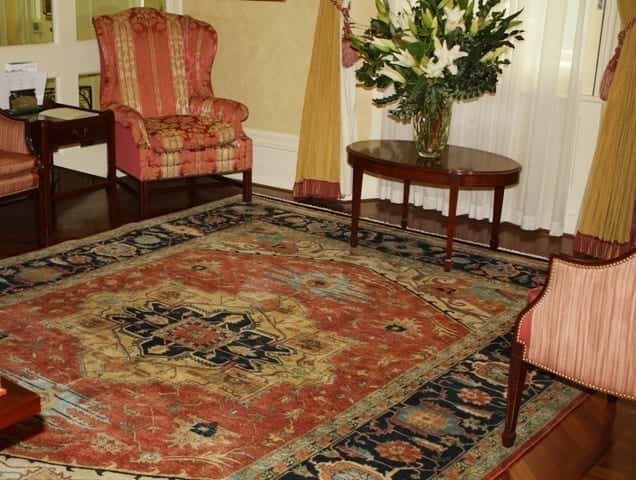 Elegant Indian carpets are distinguished and renowned for the vivid colours, unique textures, exceptional designs, and quality materials that entwine to create a vibrant masterpiece. Indian rugs illuminate the heritage and history of the region. Elaborate patterns and detailed motifs imbue the carpets with a surreal and characteristically Indian essence. As in many other cultures, the rugs in India promote the symbolism and the artistic creativity of the weaver, displaying a remarkable desire to preserve the history and the significance of art in India. 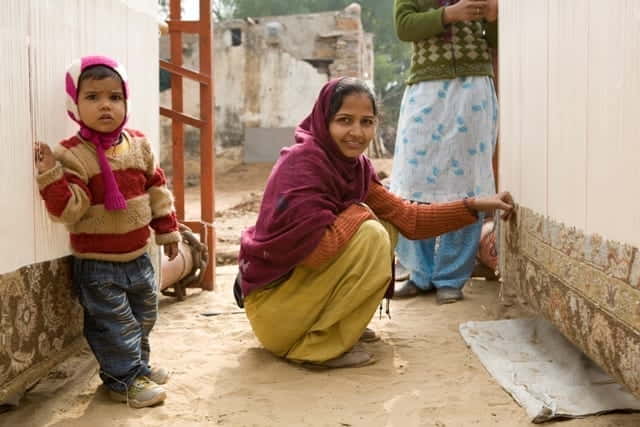 The History of Indian Rugs

In terms of historical evidence, India was relatively late in producing rugs; however, the rugs that have since been created in India are some of the most brilliantly designed and aesthetically pleasing pieces in the world. Historical and archaeological findings do not indicate that any type of rug was present in the region before the Mogul Dynasty, but it is possible that India was introduced to hand knotted rugs in the 13th century while influenced by the Islamic culture.

In 1526, a prince named Akbar invaded the country and eventually became ruler over the nation. After his conquest, Emperor Akbar lamented over the loss of elaborate rugs and carpets produced in other regions of the world, and thus he encouraged the development of artistic expression through many mediums, including rugs and carpets. The rugs that were created during the reign of Akbar were knotted with a red base colour with exotic blues and greens shaping the patterns of the rugs. The first known Indian rugs were very similar in design to Persian rugs, although over the years, they evolved into a distinctly Indian design.

Circa 1605, Emperor Jahangir took control of the region and refined the techniques used to make carpets in India. The patterns were so intricate that they resembled paintings and became elaborate works of art. Subtle changes in colour and sinuous changes in pattern led to the development of a more sophisticated type of carpet in the region. The scrolling vines paired with beautiful floral motifs were characteristic of this era, and there were also many other naturalistic elements incorporated into Indian rugs.

The development of Indian rugs was further enhanced during the reign of Shahjahan. Soaring to new heights, the patterns and textures used in Indian rugs had improved so immensely that Indian rugs became some of the most desirable carpets in the world. Pashmina piles were used to give the carpets a softer, smoother texture, and silk also became a central element to carpet production. Floral patterns were the foundational design element of carpets created during this time period.

In 1658, Emperor Auranzeb had a significant impact on the arts in India, although not wholly a positive one. Carpets continued to thrive during this period with the natural motifs of flowers, scrolling vines, geometric patterns, and at times calligraphic ornamentation adorning the textiles. 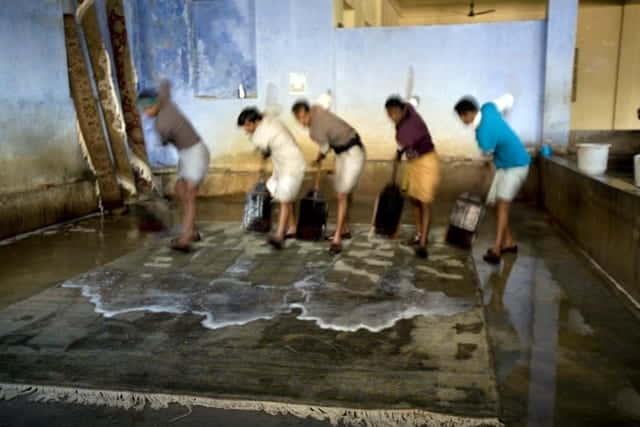 Indian carpets became immensely popular, and thus gained a tremendous amount of city centres devoted to producing these fine carpets and rugs. Some of the production centres in India are Amristar, UP, Elluru, Jaipur, West Bengal, Srinigar, Panipat, and Bihar. In the Kashmir belt, hand knotted silk carpets are the softest and most beautiful carpets produced in India. They can only be found in one specific region, and Kashmir has been a centre of production dating back to the Mogul period.

Agra is another well known region for its natural dyes and knotted carpets. Agra carpets are some of the most elegant and sophisticated with simple patterns and bold floral motifs. Jaipur carpets are produced at a medium quality with approximately 100 knots per square inch. The designs used in Jaipur are usually geometric although there may be other designs as well. Bhadohi in the Varanasi Region is responsible for about 90% of the total carpet production in the country, and most of the rugs produced here are of medium quality. Improvements have been remarkable in this region, and the designs and patterns are heavily influenced by the Buddhist religion. 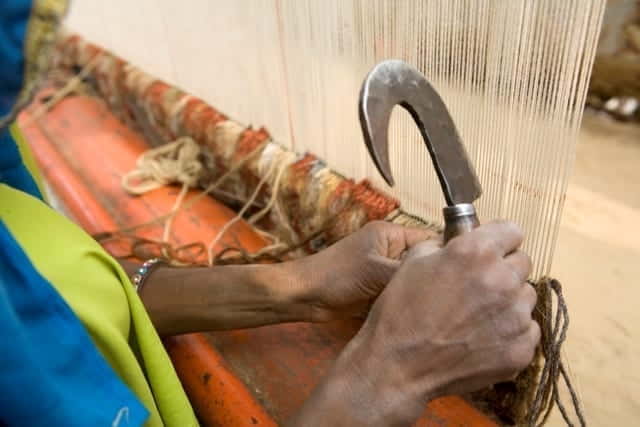 Unlike many other carpets, Indian carpets use a variety of sharp, dynamic colours to create an enticing and appealing product. Natural dyes were extracted from the root of plants, insects, and animals to create the beautiful array of colours found in Indian carpets. Pink and red were extracted from the root of the Madder, while other plants like grass and trees provided the more neutral colours for the pieces. In more modern Indian carpets, any colour in the spectrum may be used in carpets because of the introduction of other types of dyes. 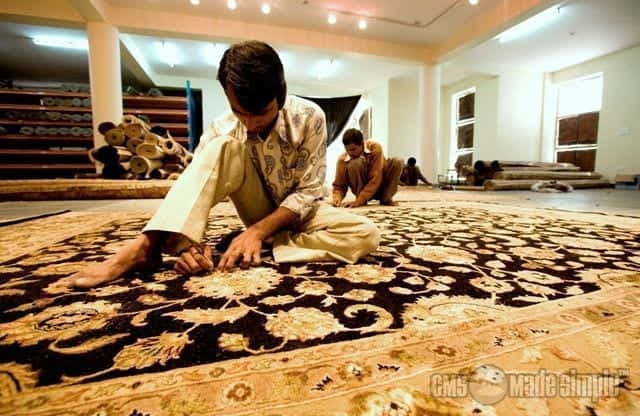 Wool is the material most predominantly used in the manufacture of Indian carpets. The pile of the wool is used to create strong, long lasting, and beautiful designs for the carpet. In India, Kashmir is also used to create rugs and carpets, and this type of material is one of the finest in the world with a soft, luxurious feel. Silk has also been used in many carpets produced in India.

While the colours and materials used in a carpet are both integral components, the design, motif, and pattern are also essential to the composition of the rug. Indian rugs seemed to take the most beautiful and elaborate designs from the other world centres of production and combine them into unique representations of the area. Elaborate designs accompanied by intricate ornamentation created beautiful patterns that adorn the rugs. The weave in Indian rugs is more symmetrical, with rare patterns that embody the true nature of Indian culture. Geometric patterns, floral motifs, and the graceful arabesque combine to make Indian rugs some of the most beautiful and renowned in the world.

There are various methods that can be used to weave together the threads used in the classic Indian rugs. Hand knotted carpets are the most valuable, while vertical and horizontal looms also provide the ability to turn pieces of thread into a masterpiece. Another popular weaving method in India are the Tibetan weaves in Nepal. A finer way to weave threads gives the Tibetan weave a distinctive flair. 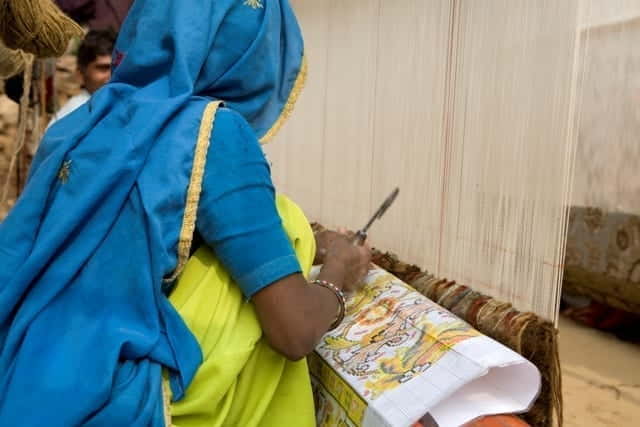 A World of Creativity and Artistic Expression

A magical blend of symmetrical shapes, brilliant hues, and ornamental adornments influences the style and composition of the Indian rug. The world renowned Indian rugs offer a simple, yet exquisite blend of the elements to form a representation of both nature and beauty.

To view our collection of Indian Carpets click here.