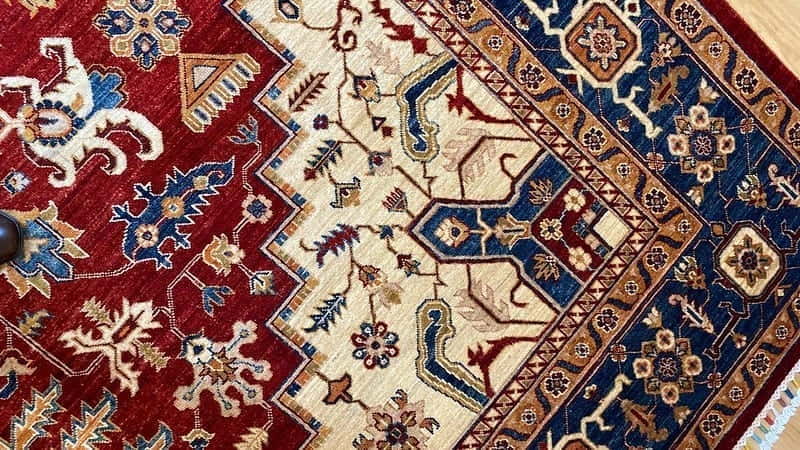 Textiles in Afghanistan offer an array of beautiful and unique options that are distinctive to the area. Hand-woven Afghan rugs and carpets have developed over the centuries into some of the most widely known pieces for their price, their exotic look, and their rich textures. Afghanistan is very close in proximity to Iran – the home of the world-renowned Persian carpets and rugs – however, the style and design of Afghan rugs is much more similar to those found in East Asia. 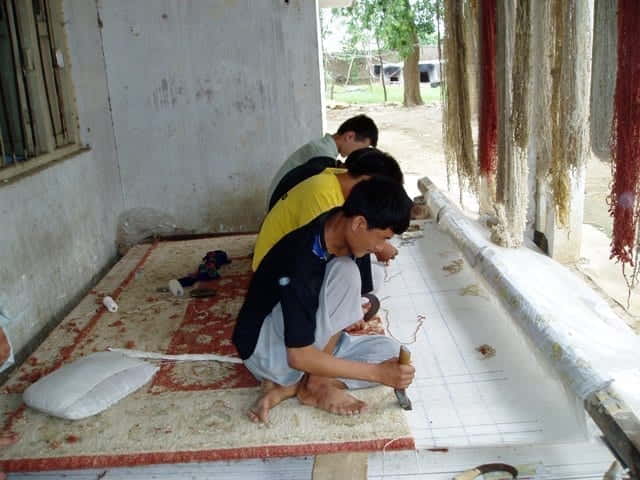 The precise date that Afghan rugs began to be developed is unclear; however, historical accounts indicate that women have been weaving rugs in Afghanistan for centuries, pouring their heart and their feelings into the textiles that they create. The genuine honesty behind the Afghan rugs still pervades the industry today. Many Afghan rugs are truly original with a deep symbolic significance. Historically, the Afghan rugs are believed to tell stories of great heroes and illuminating prophets. Creativity abounds in the production of rugs in Afghanistan, and they are one of the truest forms of self-expression.

Traditionally, carpets and rugs were exchanged between nobles as their most prized gifts. Far more prized than the utilitarian purpose of the rugs was the artistic expression tied to the piece. In addition to painting a storyline with the elaborate weaving, many cultures and sensibilities are imbued into the weaving of this region.

Historically, carpet weaving has been one of the most fundamental industries in the nation. The subtleties of the Afghan rugs are charming and inspiring, and they also provide a significant historical reflection. The war history in Afghanistan has been depicted in a number of carpets. Since the region has had such a profound experience with war, many of the Afghan rugs are adorned with depictions of the militaristic battles that have taken place in the country. 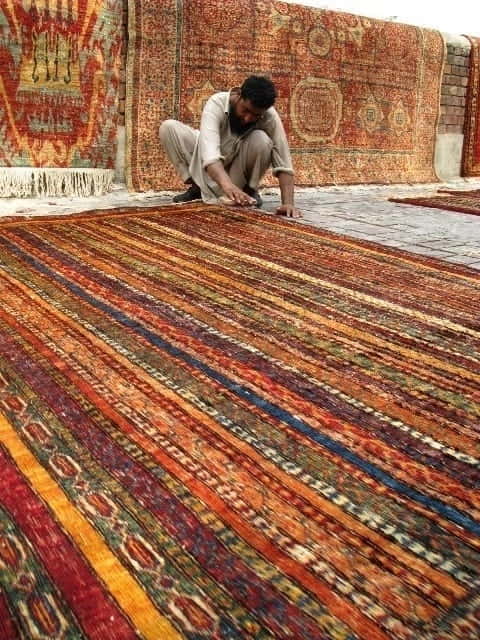 Natural dyes have been used in Afghan rugs throughout the ages, with vegetable dyes being the most prominent. Hand knotted or spun Afghan wool is imbued with natural dyes extracted from the roots of plants to create naturally beautiful and subtle hues. Afghan rugs are very common, although many people prefer the larger carpets. Pile carpets knotted in Afghanistan can take quite a few months because the weavers are meticulous when creating their art. A large carpet or other type of floor covering may take nine months to complete, which gives a glimpse into the true dedication of the Afghan weavers. 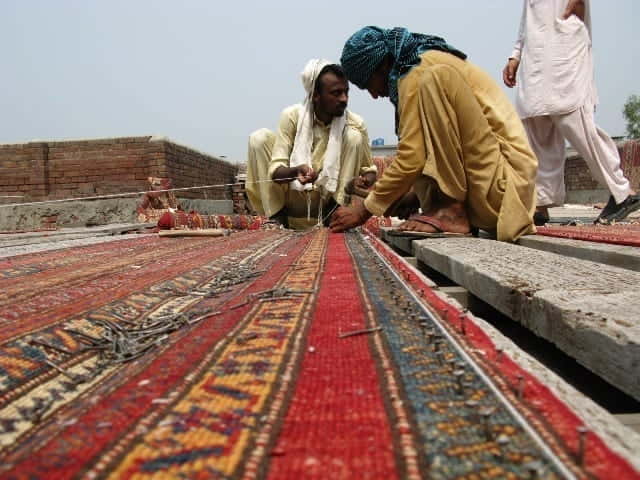 During the late 1970s, Afghanistan experienced civil unrest, which encouraged a number of citizens (and weavers) to leave the area. Many people settled in the surrounding regions, and this prompted the creation of a new type of Afghan rug. A fascinating style and a unique design set the new Afghan rugs apart from all of the other Oriental and Persian rugs in the world. The simplistic designs of other regions with geometric shapes, beautiful floral patterns, and other traditional imagery could not depict the turmoil surrounding the region. Rug makers in Afghanistan then began to produce rugs depicting the harsh realities of war. The level of creativity and symbolism had extended tremendously with the introduction of wartime memorial rugs.

The tragic geopolitical conditions in the region have led to a ‘renaissance’ in rug making. Refugees that fled to Pakistan during the great turmoil and unrest caused by the wars in the Middle East live in tents on the outskirts of the region, segregated by language and heritage. There are hundreds of thousands of weavers in the region, and they have developed this novel approach to creating fine textiles. With an immensely varied assortment of rugs in production, the refugees are ensuring the longevity and prosperity of the carpet industry. The weavers are seeing a remarkable demand for their products, although they remain in Pakistan until the political turmoil in their country abates.

An inspiring story along with a meticulous weaving process has made Afghan rugs some of the most valued textiles in production. The innovation and perseverance of the Afghani people is seen in the remarkable growth of carpets and rugs. 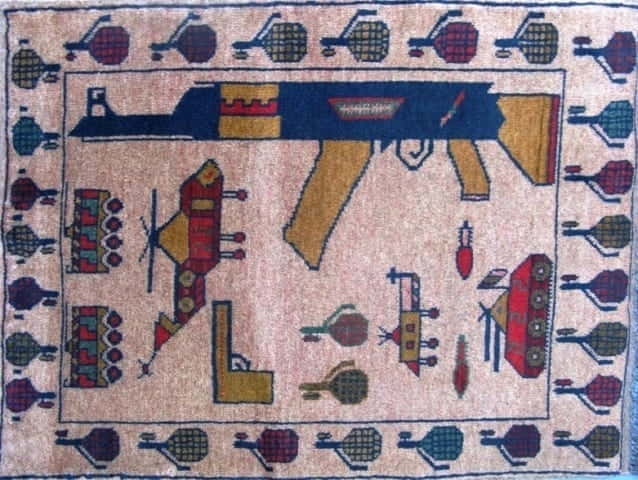 Traditionally, the subtle hues used by the Afghan workers are of a red or ivory colour. Other colours such as a deep, exotic blue or a rich green may also be used to create borders and patterns on the rug. Most of the rugs made in Afghanistan are crafted with wool warps and wefts. The strength and durability of wool is the reason that so many Afghan weavers prefer this type of material. In addition, the wool can easily be dyed with natural or synthetic blends of colour to create richly hued and brilliantly designed textiles. 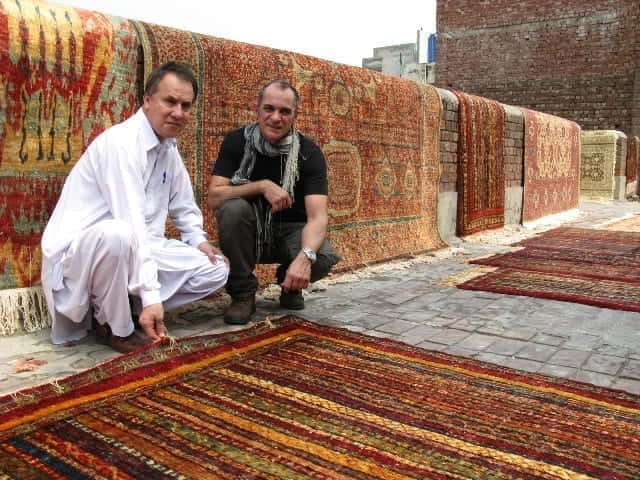 The Balouch rugs are also an essential element to the Afghan rug industry, and they provide a somewhat different blend of colours, styles, and structures. The woolen material used in other traditional Afghan rugs is still used in the Balouch rugs; however, the design is more somber with darker hues and geometric patterns providing a distinctive flavor. The western region of the country is home to the Baloch people, and they are responsible for the unique Baluchi rugs. 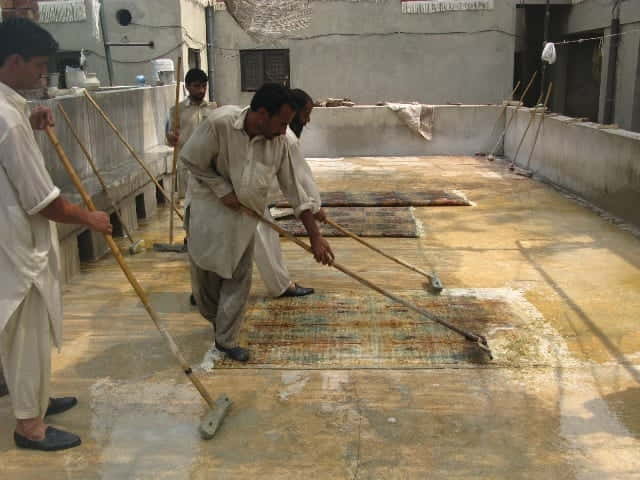 Production of Afghan Rugs in Herat

In addition to the Baluchi rugs, there are also a number of other centres in the region that produce a multitude of rugs in various shapes, sizes, styles, and colours. Herat is home to the most renowned type of Afghan rug, the exotic Shindand. These rugs are named after the people that create them, similar to the Balcuhi rugs, and they are a very beautiful style of Oriental rug. The rugs in this region are characterized by a unique elongated look to the animals and humans that are depicted in the rugs. This is one aspect that adds to the distinctive flair of rugs created in Herat.

Many of the rug makers in Afghanistan differentiate themselves based on their ethnic group. The Turkmen, Uzbeks, Arabs, Kazakhs, and Kyrgyz are all widely known for their contributions to the rug industry in Afghanistan.